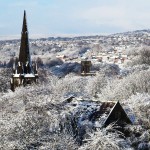 the early 1990’s by Tay Homes (Northern) Ltd., The Cricketers apartments were originally named ‘Cricketers Way’, however, this was changed during construction. The reasons behind the name change were slightly unclear, but at the time it was thought that Royal Mail had expressed concerns of a similar address name already existing within the Leeds area.

The Cricketers apartments, some with spectacular panoramic views, then had a purchase price of around £49,995 and a non-returnable deposit of £200, which went towards the purchase price, reserved your plot. These popular 2-bedroom apartments were then sold on-site by a lovely lady named Julie. The price included a fitted Symphony kitchen, a bathroom, a Zanussi WDT1085 washer dryer and a mouse!

Notable events at the same time the apartments were being built were: The first ever UK National Lottery draw took place, The Channel Tunnel officially opened, BBC1 television broadcast the first episode of The Vicar of Dibley, The Lion King (the original and best version!) was in the cinemas and the chav band, East 17, secured the Christmas number one slot with Stay Another Day. The old Leeds area code (0532) was to be used for the last time. It changed to 0113 the following year at the same time construction at the development ended.

Unsurprisingly, yet unknown to most residents, the apartment blocks were named after famous Cricketers. Starting with the ‘Headingley end’, they are named: The Appleyard, The Hutton, The Illingworth, The Hirst, The Wardle, The Yardley, The Rhodes, The Sutcliffe, The Trueman and the block up at the ‘Kirkstall end’ is also named, The Illingworth.

Plots 1 – 6 were the first apartments to be constructed at the side of the old Salvation Army Hall (now Willow House) and the original Show Home was Plot 4 (77, The Cricketers). The original sales office location, now covered with foliage, was a portacabin just off the Kirkstall Lane footpath inbetween the bus shelter and wall. The Show Home was later relocated to Plots 40 & 41 undercover car parking spaces (1 & 5, The Cricketers) and a less flimsy, fully bricked-over sales office was constructed. 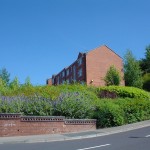 During construction, the development was a very friendly place to reside and you were never far away from a new friend and neighbour… oh, and the odd glass of alcohol. In the summer of 1995, construction had all but ended and only a handful of apartments remained to be sold. A huge barbecue was organised and held on the strip of grass behind the central row of flats for all the new residents.

Conveniently, the corner ground floor apartment, Plot 7,  had not yet been purchased. With its freshly painted magnolia walls, bare concrete floor and patio door access, it was [somewhat apprehensively] authorised by Julie as the place to provide amenities for the outdoor feast – electricity for the stereo system, shade from the mid-summer sun and a bathroom in which to retch back that undercooked sausage, nonchalantly handed to you earlier by your new neighbour.

It’s hard to imagine but nearly 30 years ago this quiet corner of The Cricketers was host to a truly unforgettable mid-summer evening barbeque, with around 50 of the original home owners, unashamedly charging through the patio doors of a not-yet-sold apartment, doing the conga.

The Cricketers remains as desirable now as it was then, with its local parks, pubs, shopping areas, excellent commuter links and sports venues. This website aims to provide residents old and new with a friendly online community and resource.

A small business card is occasionally posted through all mail boxes and this will enable you to view some pages on this website which are password-protected. If you do not have this card, you can request a new one here.

The forums on this website have been closed [sniffle]. But, the far superior ‘Nextdoor’ social platform as taken its place [yay!] If you want to say ‘hi’, post a topic of interest such as a residential issue, sell or give away an item or just want to boast about your latest Origami project, please register a free Nextdoor account and post to the brand spanking new Cricketers Nextdoor Group!